My lovely writer mate and fellow Accent Press author, Jenny Kane, invited me to take part in this tour during which authors and writers talk about their process. It’s good to think about and analyse the ways in which we approach our work. It’s been a while for me so this tour is the perfect opportunity to do precisely that and it’s great fun. You can check out Jenny’s thoughts here.

What am I working on? 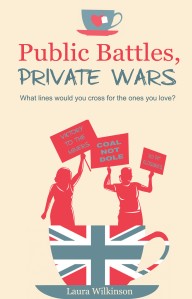 At the moment I’m buried under a heap of editing. As some of you will know, I write under different names – two writers in one body – and on New Year’s Eve (what a gift for 2014 this was) L.C. Wilkinson signed a contract with Xcite for the sequel to my hot romance, All of Me. In this book, All of Him, we follow Flick and Orlando to NYC where the pressure of life and love in the media spotlight begins to take its toll. And I am waiting for my Accent Press editor’s comments on Public Battles, Private Wars, which is out in the spring. It’s a story of a young miner’s wife in 1984; of friends and rivals; loving and fighting, and being the best you can be. And lots and lots of cakes. I think the MS is pretty clean – it went to an editor at the Welsh Books Council before Accent, who was very complimentary about it (thank God!) but there will be more work, of course. So, over the next couple of months I’ll be editing, editing, editing. Good job I like it!

How does my work differ from others of its genre?

Everyone has a unique voice. When we’re starting out, a major part of the journey is finding that voice; the one that reflects the story and the one that speaks to readers. So my work differs in voice and tone from that of other women’s fiction authors. I hope that my work is full of ideas; ideas that make the reader question, think and challenge, as well as believable, likable characters, and an involving story. I’d like my work to be thought of as women’s fiction with plenty of grit.

Why do I write what I do?

Gosh, I haven’t the faintest idea! Seriously, and I know it sounds bonkers, but characters tend to come to me; they start talking, telling me their stories. I have been inspired by newspaper articles, conversations on trains and planes, and photographs I come across. That’s what happened with Public Battles, Private Wars. I was researching another novel set in the mid-80s and I came across an image of a woman raging at a policeman charging towards her on horseback. The photograph was taken during a battle between police and miners outside a pit in South Yorkshire during the summer of 1984. It got me thinking about the women involved in the strike – the wives and mothers of these traditional communities – and how their lives changed during the year-long strike. Then a ginger-haired young woman starting talking to me. She liked to bake cakes, thought it was the only thing she was good at, but she was bright and sparky and ready for change… A friend had returned to the village and her husband was a bit of a mystery… A story emerged.

How does your writing process work?

An idea rumbles. A theme, characters develop, start to talk to me, a location emerges. I read around the subject, buy a dedicated notebook and begin to fill it. Before I write anything I have an idea of the story arc. This doesn’t mean that I necessarily know the ending – sometimes I do, sometimes I don’t, but I have a sense of the journey the character (s) will make. I choose a working title. Even if I know it’s rubbish; it often is. Leading characters get profile sheets. These will be altered and added to as the work progresses. I like to be surprised by my characters. I decide on a structure and point of view. Again, open to change. With BloodMining, my debut, I wrote 20,000 words in first person before realising that this was all wrong, and switched to close third. With Public Battles, Private Wars, (forthcoming, spring 2014) I knew it would be first person immediately. I jot down scene ideas and their purpose. Then the really fun bit! I write. Fast and loose. No serious editing. I aim for 1,000 words day. Sometimes, I manage more, sometimes less. I’ve children and another job as an editor … Periodically I write brief summaries of each chapter/scene. When I’m approximately one third of the way through, I read what I’ve got. I write the rest. I print out the MS – I don’t see stuff on screen – and scribble all over it. I draw up a detailed outline. Shuffle scenes around. Remove/add scenes. I rewrite. Repeat the last point as many times as needs be. When I am blind with editing and think it’s the best I can make it, I send it to my editor. I crack a bottle of bubbly!

Thanks for coming over; I hope you found it interesting. On Monday 27th January, you can check out how friends Bridget Whelan, Rachel Connor and Shirley Golden go about their work. They’re a diverse and talented bunch – do check out their posts.

Bridget is a London Irish writer now living in Brighton. A lecturer in non-fiction at Goldsmiths College – the leading creative university of the UK – just two years after graduating from the MA creative writing programme, she is now teaches at many locations in south east England, including City Lit, the largest adult education centre in Europe. She has also been  Writer in Residence at an inspiring community centre serving the unemployed and low waged. Her own writing career was launched when she won first prize in an international short story competition and she was granted an Arts Council bursary to complete her first novel A Good Confession set in 1960s Ireland and London. Her ebook BACK TO CREATIVE WRITING SCHOOL is an Amazon bestseller and earned her a heap of five * reviews.   Amazon

Rachel Connor writes fiction, non-fiction and radio drama and lives in a scenic hilltop village in Yorkshire.  Her debut novel, Sisterwives, is published by Crocus Books and her forthcoming radio drama, The Cloistered Soul will be broadcast on BBC’s Radio 4 in May 2014.  She teaches creative writing (currently at Edge Hill and Leeds Trinity Universities) and works as an editorial consultant and mentor, helping authors shape and refine their works-in-progress.  Other than writing, her passions are dancing, and cooking up a culinary storm in the kitchen.  Oh, and cheesecake.

Shirley Golden’s stories mostly wing their way back to the dark recesses of her laptop and await further coffee-fuelled sessions of juggling words.  Some of her short fiction pieces have found homes in the pages of magazines and anthologies, or in various corners of the internet; a few have won prizes.  She is door-person and arbitrator to two wannabe tigers, and can often be found on Twitter when she should be writing. @shirl1001

One thought on “My Writing Process – Blog Tour”