Romantic rules, and when to break them …

Little Boxes came about when I began to think about my first disastrous attempt at a novel, Moondancing, written as a hobby over ten disjointed years. It had been slated – rightly – for having too many viewpoints but the characters were still fresh in my mind. I was at a crossroads. Sweet Proposal – the book that made it – had won a competition run by Piatkus Entice, and it was time to plan for the next one. My writing life so far had been geared to getting something (anything) published and the thought of what would happen after that hadn’t really seemed worth thinking about.

Suddenly, here was a whole new ball game. There might be … readers! They might want to buy something else. But what would they like, and what would be fun to write for them? One thing I was sure about was that I was going to stick to my guns this time, and not try too hard to fit into a publisher’s mould. Sweet Proposal had originally been called The Chocolate Project, and I was still sorry I’d let it be changed. It seemed to have put my story into the cloying, over sickly category of romance. I felt embarrassed to say its name.

Fast forward now to a few months down the line, when Little Boxes had been written and redrafted numerous times and was ready to submit it to a new batch of publishers. The first advice that came my way was that it fell between two camps – not really romantic comedy because it covered serious issues but too funny to be taken seriously. It was crunch time. Should I go back to the drawing board and play for laughs/take out the funny bits? Would it never see light of day unless it fitted into a proper pigeonhole?

I’m crossing everything at the moment. Breaking rules and taking risks is a whole lot more fun than going with the flow. Little Boxes stayed as it was, found a lovely publisher in Tirgearr and by now should be out there fending for itself. I hope you’ll take a chance on it and give it a read?

Tom sat on the beach in the spring sunshine, eating cockles out of a tub and gazing rather grimly at the incoming tide. If it came much closer he’d have to abandon his painting for the day – it took a good twenty minutes to pack up and get back to his car on the promenade.

As he licked his fingers and screwed up the seafood carton, there was a scrunch of pebbles and a whoosh of air as a small boy thundered past, whooping at the top of his voice. He was followed at speed by the most desirable woman that Tom could ever remember seeing in this small seaside town. It was his Lady in Red; the one who had been cropping up in his dreams far too often since he’d first seen her on the beach. Her hair was an explosion of dark curls, and she wore tight orange jeans with a wildly clashing crimson sweater that came almost to her knees. Tom took a deep breath to say hello but he was too late.

‘Max… MAX… don’t go near the sea. I mean it!’ she bellowed, skidding straight into Tom as she chased the boy across the pebbles. ‘Sorry, sorry… have I hurt you? Is your painting wrecked? Oh – wow; it’s good, isn’t it? You can tell it’s meant to be the pier. I’m really, really sorry…’

Tom picked himself up and put his painting chair the right way up again. ‘Hey, it’s okay – you can fall over me any time,’ he said, grinning into her startlingly green eyes.

She blinked and looked away, her lovely face matching the colour of her sweater. Shielding her eyes with a hand, she scanned the beach for the boy. ‘Where’s he gone, the little toad? Ah, there he is, he’s making something out of a heap of stones – at least he’s not paddling fully dressed like last time. Oh hell, you don’t even know me and I’ve already wrecked your work. I’m Molly. I think I’ve seen you here before, haven’t I? Let me fix your painting.’

She bent down to see if she could repair the damage and Tom held out a hand to stop her trying to brush bits of stone off his picture. ‘No, honestly, it’s fine, I’ll sort it out. I’m Tom, and I’ve seen you, too. You’re easy to remember.’

‘Lots of reasons – you often seem to be in a hurry, you always wear something red, you’ve got lots of kids, you’re gorgeous…’ Tom stopped in confusion.

‘Gorgeous? Me? Do you need your eyes testing or something?’ Molly blushed again and looked at him properly for the first time. ‘I’m sorry, that was really rude,’ she said. ‘My mum’s always telling me I don’t know how to take a compliment.’

‘Don’t worry, maybe you just need a bit more practice.’ Tom bent to carry on sorting his painting kit out. He couldn’t help noticing how her eyes rested on his forearms as he finished tidying up and, clearly aware of his scrutiny, she reddened even more.

‘You’re very strong, aren’t you?’ she blurted out.

Suddenly bereaved, Molly White realises that she has never really known her feisty husband Jake when random boxes begin to appear through the post, each one containing a tantalising clue to the secrets of Jake and Molly’s past. Someone who knows them both well, for reasons of their own, has planned a trail of discovery. The clues seem to be designed to change Molly’s life completely, leading her around Britain and then onwards to rural France and deepest Bavaria.

Meanwhile, waiting in the wings is Tom, a charismatic artist who runs a gallery in the same town. Strong, independent and wheelchair-bound from the age of fifteen, he leads a solitary life and has no idea how devastatingly attractive he is to women. When Tom meets curvy, beautiful and funny Molly, he knows that she is his dream woman, but she seems way out of his orbit until the boxes start to weave their spell and the two of them are thrown right out of their comfort zones.

Little Boxes is a story of love in a variety of guises – mother-love, unrequited passion, infatuation and the shadow-love held in memories that refuse to go away. 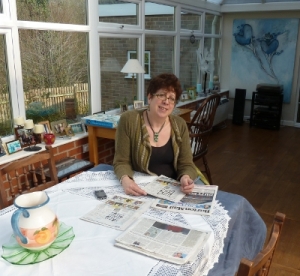 Celia J Anderson spends most of her spare time writing in as many different genres as possible, including children’s fiction. In her other life, she’s Assistant Headteacher at a small Catholic primary school in the Midlands and loves teaching literature (now comfortingly called English again but still the best subject in the world.)

She tried a variety of random jobs before discovering that the careers advisor at secondary school was right, including running crèches, childminding, teaching children to ride bikes (having omitted to mention she couldn’t do it herself) and a stint in mental health care. All these were ideal preparation for the classroom and provided huge amounts of copy for the books that were to come.

Celia enjoys cooking and eating in equal measures, and thinks life without wine would be a sad thing indeed. She is married, with two grown up daughters who have defected to the seaside. One day she plans to scoop up husband and cats and join them there.