It’s that time of year when I give a brief round-up of books I’ve read in the past twelve months, those that I have enjoyed or have affected me in some way.

Leaving aside the many manuscripts I’ve read in my role as editor/mentor – and there have been two this year which I believe thoroughly deserve to be published, whether they will be or not remains to be seen; the publishing world moves in mysterious ways – I’ve read around 40 books of fiction in 2014. This is my average. Ironically, I read more before I started writing, but with a family and another part-time job something has to give if stories are to be written.

Of the 40, around half were, broadly speaking, contemporary women’s fiction, with the remainder spread across most other genres aside from fantasy, sci-fi and historical sagas. So, in no particular order my favourites were:

In this, Ashworth’s third novel we follow four members of a Lancashire Mormon family across one day as they await the homecoming of a prodigal son. He has been spreading the gospel in Utah. As ever, Ashworth climbs into the skin of her diverse characters with consummate ease. Funny and poignant.

Sarah Rayner’s Another Night, Another Day

A brilliant novel about three characters who meet in a psychiatric clinic. Sound depressing? It’s not; it’s a joy from start to finish. No one does bittersweet quite like Rayner. No wonder she’s a best seller.

Dark, disturbing and with one of the most shocking and surprising twists I’ve come across. I’ve been a fan of Doughty for years, but this is her best yet.

Nathan Filer’s The Shock of the Fall 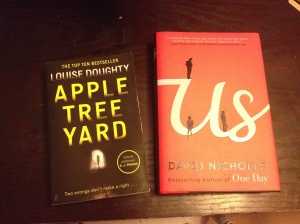 An incredible debut with one of the most memorable voices in recent years, The Shock of the Fall is Matthew’s story, a young man battling mental ill health and memories of his dead brother, Simon. Has one of my all-time-favourite lines.

A tender exploration of a 25 year relationship; an odyssey of love. I cried, and I cried with laughter. Believe the hype.

My to-be-read pile is already mahoosive, but I am especially looking forward to Betsy Tobin’s Things We Can’t Explain, Carys Bray’s A Song for Issy Bradley, Rowan Coleman’s The Memory Book, Emma Healey’s Elizabeth is Missing and Richard Flanagan’s The Narrow Road to the Deep North.

It feels as if 2014 was a great year for wonderful fiction, but then so many years are, it seems to me, and I am awed by the spectacular talent out there. When asked for a piece of advice by wannabe writers I always say: Read. Read, read, read. Be inspired by the good work; read it again; analyse why it’s great and learn from it. Also, learn from the not-so-good work. Where and why does it fall down? Make sure you don’t make the same mistakes.

Merry Christmas to you all and don’t forget: Books make great gifts!