Across the media there’s been much talk of the terrible events of 2016 – and the terribleness of some depends upon which way you voted, though it’s fair to say most people I know, myself included, were crushed by the June result here and the November one across the pond.

Today as I dragged out my new diary – sniffed it, enjoyed the crisp, as yet unsullied pages – and transferred important information across (like all those passwords we’re not supposed to write down!) my Facebook timeline was dotted with posts celebrating Good Things of the past twelve months.

Traditionally, I have penned a review of my year here but had not felt inclined to do so for 2016 till now. The positivity on social media reminded me that I, too, have had as many good moments as difficult, if not more, and in the spirit of #lovenothate #beattheblues #hopenothate here’s my list: 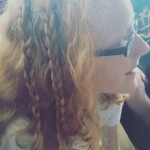 Ginger1 turned 18 and what a fine young man he is. Some might say my job is done, though I can’t agree. Parenting is for life.

Ginger2 turned 13 and he is shaping up nicely. And growing the finest head of hair I can think of.

I published my third novel – thanks are due to my publisher Accent Press and to all the book shops, bloggers, readers and fellow authors who supported it along its way. Bless you all.

I wrote a radio play after attending a script writing course led by Sue Teddern. It was brilliant to take on a fresh challenge and make new friends along the way. Whether or not the play is ever produced doesn’t matter (much!); the process was priceless.

I began a new novel – abandoned it and began again. Another lesson and reminder that no matter where you are in the journey there’s always something new to be learnt or discovered.

A conference I helped to organise and run – The Beach Hut Writing Academy’s From Inspiration to Publication – was a sell-out success. So much so that we’re running another in 2017.

I took part in a number of fantastic literary events – including City Reads, part of the Brighton Festival.

I was a writer-in-residence for Little Green Pig’s pop-up gallery in the summer and subsequently have been running workshops for the organisation which offers creative writing and storytelling workshops to children and young people in Brighton & Hove. A fabulous charity.

The BigFella and I made it through another year together – that’s 25 in total since we first met – and we love each other as much, perhaps more, than we ever have.

We enjoyed a great holiday in Cornwall with my lovely sister-in-law in August.

My parents are healthy and living well at a time when so many friends are facing/have faced the loss of theirs.

I witnessed friends fall in love, marry, have children, be published for the first time.

There is more love and hope in the world than hate and despair. The bad shit is given so much more air time because it is rare – at least here. We are truly blessed. Winners of the lottery of life.

Be thankful, be content. Know that every small act of compassion and kindness is meaningful. As my lovely grandma used to say: From small acorns…

Today, I’m kicking off another Accent Press author Kristen Bailey‘s Christmas blog party with a fairytale of New York. Do pop over, take a look and follow the rest of the tour. It’s going to be a blinder. Essential reading for all book, booze and food lovers. 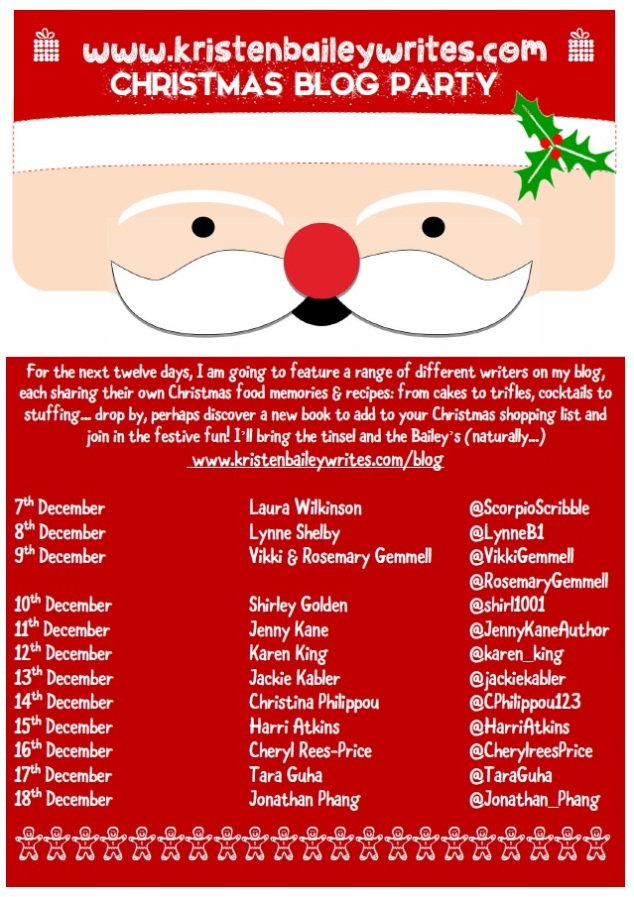 My novel was selected for the Kindle Daily Deal and it is only 99p at this very moment. Tomorrow it will be back at full price. It’s been climbing the charts steadily all day and it has been amazing to see this. I’ll blog about the day in more detail soon, but for now I wanted to let you know that if you’ve not got a copy, now is the time! Accent Press, my lovely publisher, created splendid artwork for promo purposes and I put a few Canva images together myself. No prizes for guessing which are mine! Anyway, here’s a buy link:http://amzn.to/1X00Af5

THANK YOU AND ENJOY! 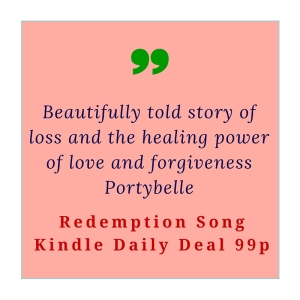 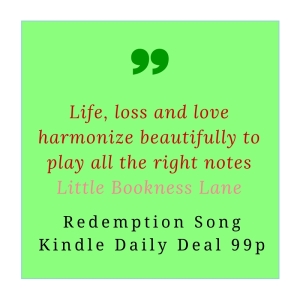 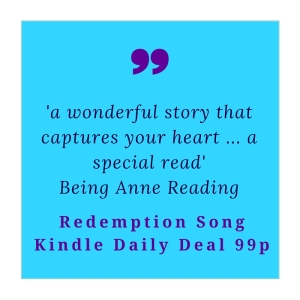 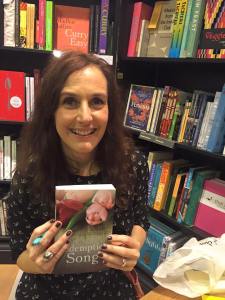 Me, the pleaser, smiling for the camera (of course)

Commonly, we like to like our fictional heroes and heroines, and within some genres it is considered literary suicide to have a lead that isn’t very nice. Before I completed Redemption Song, had I been asked, I would have said I prefer stories with a likable protagonist: I adore Lou in Me Before You, Annie and Kate in The Day We Disappeared.

However, once the first draft was down and I knuckled down to the real business of writing – rewriting – I realised that while I love Saffron, my lead, her behaviour isn’t always likable, especially at the novel’s opening. I pondered whether to increase her nice factor but in the end decided that readers must see her warts and all. She is a good person; she just doesn’t always present that way!

And I began to dig a little deeper into my own likes and dislikes. Were my favourite literary heroines all lovely? No, as it turned out … Katniss Everdeen, Lisbeth Salander, Emma Bovary, Emma Woodhouse, Becky Sharp, the list goes on. These are women I find fascinating, but always nice? Definitely not. The more I thought about it, the more I acknowledged my penchant for difficult characters, difficult female characters in particular. Why is this? 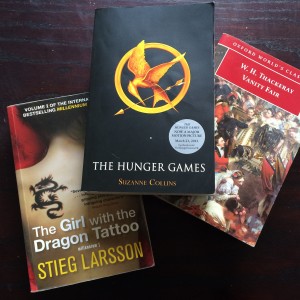 Novels with some of my favourite kick-ass heroines

It stems, I believe, from a dream to be the rebel, the feisty girl who does as she pleases, who kicks ass, metaphorically if not literally. Like a great many women – more than men, I believe – from childhood I have been a ‘pleaser’. Pleasing others equals likability and acceptance, and if you need proof that girls seek approval more than boys, spend some time in a primary school classroom! As a girl, I would often set aside my desires and ambitions rather than risk upsetting others. As the years have passed, I have become better at not always being selfless, but I still find it extremely difficult to say no. This is why I enjoy those heroines who don’t give a damn what others think (some of the time), who are unafraid to pursue their desires, who behave badly sometimes, who forge a new path, who are unafraid of unpopularity. And the irony is that it is precisely these types of women who often become role models and national treasures. In real life I’m thinking of the likes of Caitlin Moran and Suzanne Moore.

An author I respect, Lionel Shriver, said some years ago: ‘Goodness is not only boring but downright annoying… When fiction works, readers can develop the same nuanced, conflicted relationships to characters that they have to their own friends and family.’

And now that Saffron from Redemption Song is out here in the world, I must turn my attention to Diana, the protagonist in my next novel, Skin Deep. A former model and an artist, she is beautiful, talented, messed-up, thoughtless, selfish and needy. Another challenge, in essence!

Have a lovely weekend, people, 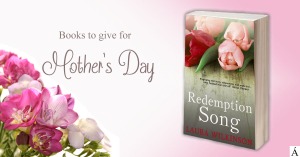 Today I’ve been guesting at Lynne Shelby‘s blog on her regular A Sense of Place slot. Of course, I talk about the setting in Redemption Song, my latest, but I also talk about the locations in my other novels and in the one that is still to come … scheduled for publication in March next year. Skin Deep probably has the most unusual location – a sink estate in Manchester that was demolished in the mid-90s, way before the story of Diana and Cal arrived in my head. Pop over and find out more … HERE. 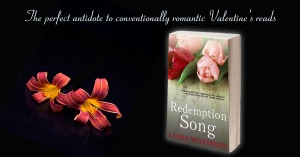 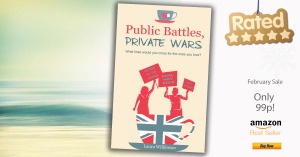 I’m not sure of the origins of the saying ‘going for a song’ but I like it. It’s something my grandma used to say and it has a cheerful, optimistic feel about it and why not? Throughout February my last novel, Public Battles, Private Wars, a story of friendship, love and overcoming adversity, is available for Kindle for just 99p.If you’re unfamiliar with my work and would like to give it a go, there’s little risk here. 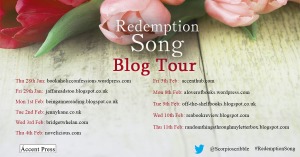 It’s the final day of the tour and I’m delighted to be over at Anne Cater’s wonderful Random Things Through my Letterbox. I have huge respect for Anne’s opinion about a book so was thrilled when she agreed to review Redemption Song and to host. Thank you, Anne. There’s also a #GIVEAWAY over there. What are you waiting for?!

Laura Wilkinson
Create a free website or blog at WordPress.com.