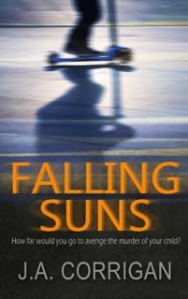 Please welcome debut author JA Corrigan to the blog. JA’s novel, Falling Suns, is published on 14th July by award-winning press, Accent, and it is a cracking read. I can’t recommend it highly enough. Here, she talks about revenge and its links to tragedy tradition. Thank you, JA.

The Revenge Plot is one of the oldest in history and sits easily alongside The Tragedy Plot. In fact, as the most famous of revenge plots shows us – Shakespeare’s Hamlet of course – revenge and tragedy are inextricably linked.

I pondered on this for some time.

Are they linked because essentially revenge is an unethical act and so therefore the result of retribution will always be tragic or, is the desire for revenge a natural human instinct that through religious and spiritual teachings has been demonised? The ultimate act of revenge is murder; a sin within all the major religions of the world, and in all civilised societies, a crime.

The thirst for revenge is one of the oldest human compulsions, and so using it as a theme in a novel, play or poem, stands up there as a premise that will always be interesting, throw up questions and cause angst – for both the writer and the reader. Revenge is often the precursor to a tragedy, just as much as the love story. The outcome of the act of retribution, I decided, could never be a good one.

And yet, the need and desire to ‘put right’ a wrongdoing, a brutal act, is so strong, and so much built into the human psyche that it is a storyline that for me, was hard to resist.

There can be no revenge without its ramification – that of tragedy.

Alongside the theme of revenge sat the idea of the strongest of human emotions – that of maternal love – and this too emerged as part of the premise for my story. Rachel adores her son and yet … in the opening of the novel we sense that this is not enough for her, that she wants and needs to return to her job, and with this realisation the seed is sown that Joe’s disappearance is somehow her fault.

In the early stages of planning my story, and with the theme of uncompromising maternal love imprinted inside my mind, I began to have the thought of how I could turn the trope of maternal love upside down and push it inside out. How an emotion that is considered good and nurturing can become bad and parasitic.

I knew I had to explore both.

When I first began to outline the plot for Falling Suns I did wrestle with myself. Could I possibly have a protagonist, and maintain my readers’ sympathy for her, when she is planning revenge and cold-blooded murder?

In the comfort of our own home, sitting on the sofa, many of us have said: ‘If he/she did that to one of mine I’d kill them.’ Fortunately this scenario is rare; i.e. that the person saying the sentence will actually be placed within the tragic circumstances to carry out such a threat. But what if you are placed in that position? What if your child was brutally murdered by a person that in time you were able to confront … and take revenge by taking the murderer’s life? What if you possessed all the tools, the emotional and mental strength to do what others could only imagine? What if?

This is the premise for Falling Suns: that Rachel Dune, the distraught and grieving mother, plans her revenge on the man who has been placed in a psychiatric unit for the brutal murder of her son. But as the story unfolds and as Rachel begins to unearth from the depths of her consciousness her own past, she begins to question that perhaps revenge is not what will appease her grief. As with many revenge plots there are other variables at play for Rachel, and it is not until she is able to explore these other factors that she slowly recognises the flaws in her plan, and the defects within her own family.

Revenge for Rachel is a need; a need that could destroy her, a need that can only end in tragedy – but not the tragedy that she herself foresees.

It is the tragedy of her past and all that lives there. 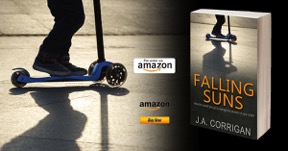 A psychological thriller for fans of Belinda Bauer, Mark Edwards, Clare Mackintosh – a dark and brooding tale about the horrors that can lurk within a family.

Ex-DI Rachel Dune’s small son is missing. Then his body is discovered. Her cousin Michael is found guilty of his murder and incarcerated in a secure psychiatric unit.

Four years later, now divorced and back in the police force, Rachel discovers that Michael is being released to a less secure step-down unit, with his freedom a likely eventuality. Unable to cope with this, she decides upon revenge, assuming a new identity to hunt him down. However, as she closes in on her target, her friend Jonathan, a journalist, uncovers unnerving information about her mother and others in her family. Jonathan begins to suspect that Rachel’s perception of the truth might not be as accurate as she thinks. 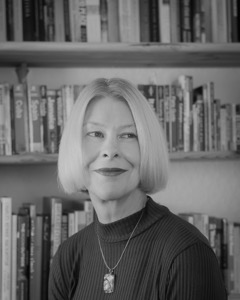 JA Corrigan is originally from Mansfield, Nottinghamshire, but now lives in Berkshire and shares her life with a husband, a teenage daughter and a cute cockapoo.

When not writing she is either walking the dog, reading, or cooking. She also likes to run, and drink white wine infused with hints of vanilla or gooseberries.

Falling Suns is a great, tense read. You can check out my review here.